It's always a risk planning a December ride; shorter days, greater chance of iffy weather and therefore less likely to get much of a crowd. So I was pleasantly surprised to turn up to lead the ride and find two people already waiting for the off. A group of five set off. The sun shone most of the day and we got back as dusk was falling, not helped by your ride leader getting a puncture, which he found setting off after lunch.

From Hatfield we migrated south to South Mimms and took the route via the village to the A1 horse and bike bridge at Trotter's Bottom. Skirting east of Barnet we then dropped down to the Dollis Valley Greenwalk to Whetstone. A brief stiff climb over the Whetstone ridge and we headed down into East Barnet for a lunch stop.

Lunch was a discovered café, the "Best Village Café" in East Barnet, spotted as we came into town. A "special breakfast" including coffee (and proper coffee at that) was an outrageous £3.80. (I'll have seconds next time). If you order chips, expect to have to eat a big portion. Fortunately hungry cyclists share and eat everything, so not a problem either. 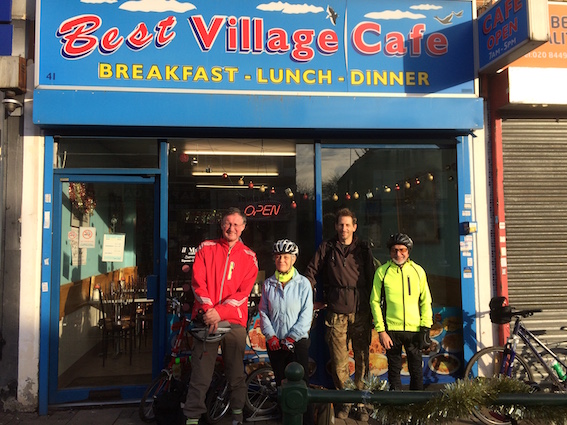 Refuelled we returned north via the Pymms Brook valley and Monken Hadley Common. This got us to Hadley Wood and a return ride north along National Cycle Route 12 to Hatfield.

Much of the route is on off road cycle paths or quieter roads, but with busy roads to cross in places. In order to cross Monken Hadley Common we had to push our bikes for approximately 1/3rd mile as this is a footpath only. The entire route is here.

Four of us set off round the St Albans Green Ring. This is St Albans flagship recreational route. It as some useful parts and some very good parts but sadly as with much of the cycling infrastructure in this country cycle traffic comes a poor third after motor and pedestrian traffic.

We had a very leisurely ride along the Alban Way then joined the Green Ring and made our way round it to the Inn on the Park in Verulamium Park. Much of the signage on the Green Ring is pretty good but there are some gaps.

After lunch at the Inn on the Park we returned again via the Alban Way.

Well done to St Albans District Council for the bits you've done right and hopefully the rest can be improved over time.

Our October ride happened to coincide with Apple Day at Tewin Orchard so that was chosen as the destination. We decided to meet at Wrestlers Bridge in Hatfield because if we had started in WGC it would have been rather a short ride (although we could have extended it by going a longer way round). Three of us set off from Hatfield and we picked up another three at Morrisons in WGC.

From Morrisons we cycled south alongside the B195 then crossed the road to take the cycleway leading to the roundabout at the junction of Moors Walk and Panshanger Drive. Continuing north on the cycleway we passed Panshanger airfield and descended a steep gravel track to the B1000. We turned right and cycled along the verge for about 100 metres before crossing the road and heading up the track past Tewin Mill House to meet Archers Green Lane where we turned left. A bit of a climb brought us into Tewin and we carried on past Lower Green to Upper Green where the Apple Day was taking place.

There was a good selection of cakes available and various stalls to visit, apples to taste and apple juice and orchard honey to buy. 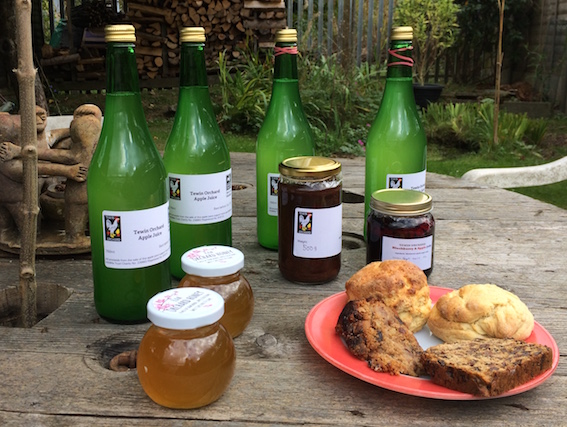 Some of us went on a guided walk around Tewin Orchard Nature Reserve and we all made our own way home. It didn't rain and although it wasn't particularly warm we saw plenty of sunshine. A good ride which was enjoyed by all.

Six turned up for the ride on Sunday, with a seventh joining us at the lunch spot. It was a glorious sunny day and we had a very enjoyable ride along the old railway nearly into Luton, before climbing up to Someries Castle on a quiet country lane. 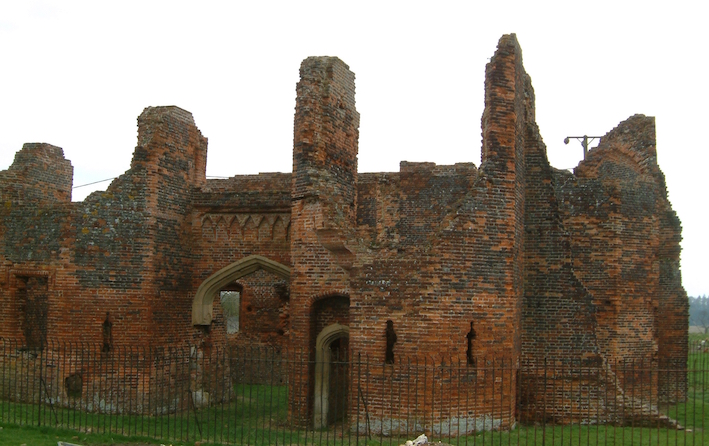 We stopped for a picnic lunch in the extensive castle grounds, then walked our bikes along what turned into quite a sticky, muddy footpath (churned up by the "Landrover Experience") along the perimeter of Luton Airport, with jets roaring overhead. We rejoined the railway path after a quick bike-carry up some steps, and after a pause to remove large quantities of mud sandwiched between tyres and mudguards, we made our way back home. A stop in Wheathampstead for tea & cake before the last few miles home rounded the day off nicely. 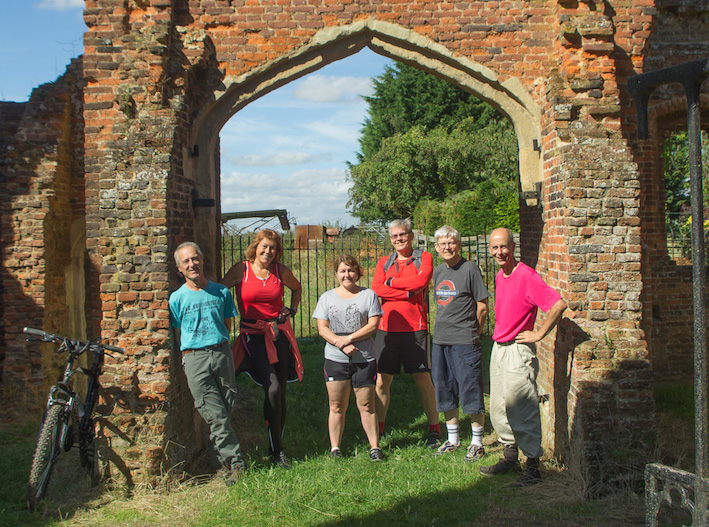 You can see our route here.

A group of 6, including two new recruits set off from Morrisons in fine warm weather to visit the nature reserve at Amwell. Although quite long, it is an easy ride without any difficult hills and almost entirely motor traffic free. That's not to say there wasn't any un-motorised traffic. The weather had brought plenty of people out on bikes and on foot.

Once at Amwell we decided to head straight to the dragonfly trail. Not many dragonflies were seen, but we all enjoyed a picnic at a seat along the trail. 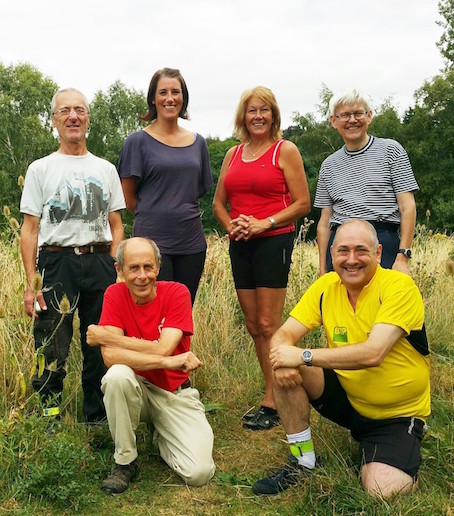 On the way back, we stopped off at one of the hides for an obligatory viewing of the water fowl. There was very little to see close by, apart from a solitary coot ducking and diving in the reeds outside the hide. A few of us had brought binoculars, so it was possible to have a closer look at the dots in the far distance. 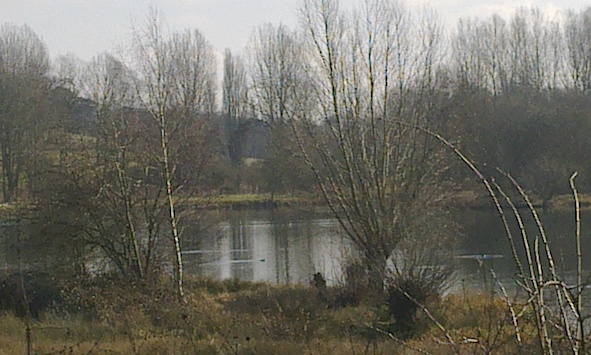 But with nobody on hand to help us identify the birds, we soon gave up and headed for our other principle objective of the afternoon - tea at Serendipity's Cafe in Hertford. After a lengthy session appeasing our cravings for cake, we retraced our tyre marks back to WGC via the Cole Green Way, to complete a very enjoyable day.

It was a bit damp as we made our way to the start point and carried on being a bit damp once we got going, but warm enough for shorts and sandals. Just three of us set off and cycled to Devil's Dyke near Wheathampstead. We went for a detour along the remains of this ancient defensive ditch - a bit slippy in the damp but interesting to think that it defended (or failed to defend) the Catuvellauni tribe so long ago. 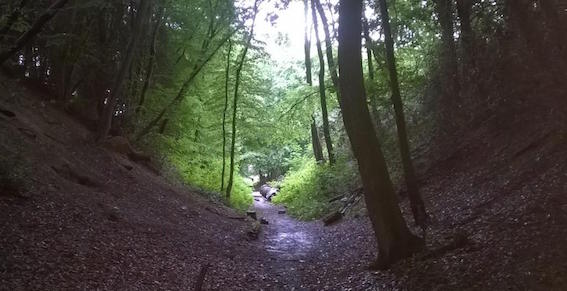 Damp and slippy in Devil's Dyke

After welcome coffee and cake 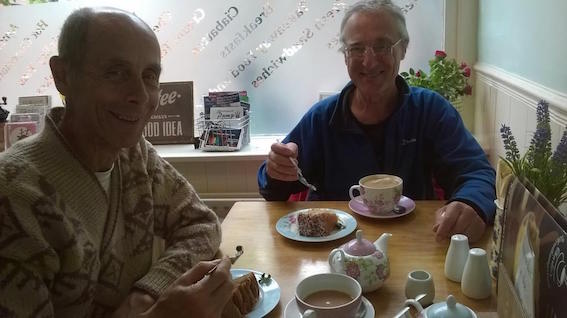 Coffee and cake at Charlie's Cafe

we headed back along the Ayot Greenway to Welwyn Garden City and then back to Hatfield.

You can see the entire route here.

The good thing about sunny days is they encourage people to come out on their bikes.

Sunday 11th April 2016 was a sunny day, unspoilt by sweet spring showers, and 14 riders joined me on our ride to Hertford for lunch at Serendipity Cafe. Special mention should go to Laura who cycled in from Harpenden and joined the ride at Hatfield Station and Viv who came up from Potters Bar.

The Cole Green Way is beginning to leaf but was a bit too muddy for the ride leaders Brompton, when it got between the tyre and the mudguard at the front. So on the way back, ride leader promptly became tail end Charlie!

Thanks go to Roger for being the rear guard and to Freddy (on his own bike, not the tandem) for making sure Dad didn't ride too far ahead. Finally thank you to all who came along. We hope to see you again soon.

Despite cold and damp weather about twenty people came out for our joint Sustrans and Cleaner Hatfield Action Group litter pick along a section of the Alban Way. Between us we collected about 50 bags of rubbish plus a pile of larger stuff.

There is more about the Cleaner Hatfield Action Group here, including contact details of the organiser. If you want to get more involved please contact her and say hello on Streetlife (you need to register).

Despite the cold we had a really enjoyable ride. A group of us set off to cycle to Emily's Tea Shop in Whitwell. It was a sunny day but with quite a cold headwind. We were well wrapped up so that was not a problem. We cycled at quite a gentle pace with a few stops for breathers.

Somewhere around Codicote we were joined by another rider from Harpenden who amazingly had managed to find us.

We continued on quiet roads and bridleways where we all enjoyed sliding about in some quite slippy mud. 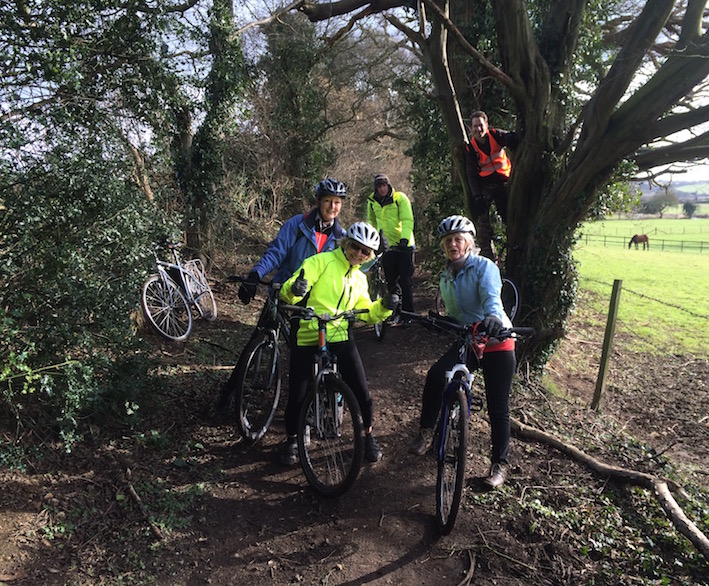 We finally made it to Emily's Teashop where good hot food and coffee was waiting for us. 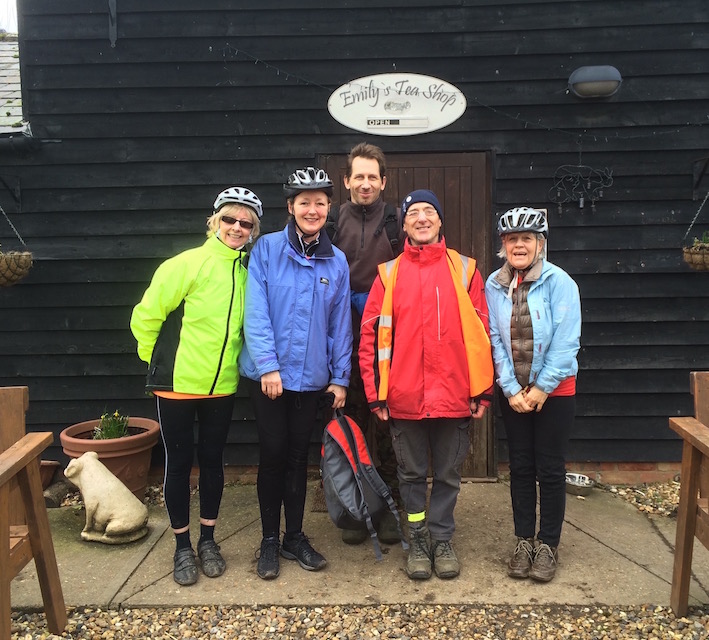 Well fed and rested, ready for the return journey

After a great sociable lunch it was a little difficult to get ourselves back out into the cold but we set off and were soon warm again. We followed the same route back and with a tail wind we were soon back in Welwyn Garden City.

Thanks to all who came and made such an enjoyable ride.

One of our group is fairly new to cycling, here is what she said of the ride:

"I thoroughly enjoyed my first cycle ride proper! I was probably slightly ambitious with setting my sights on the Tea Room in Whitwell which was a 20 mile round trip from WGC but I made it! Only possible with the huge support from yourself and the other seasoned members of the group. Thank you for all of the encouragement and patience. I am definitely hooked and will be joining the next outing now that I have some confidence in how far I can go. Thank you again and I would recommend the group to anyone who would like a friendly and unpressurised cycle ride."

With a news item in the Welwyn Hatfield Times, I hoped to see some new faces on the ride and so we did. On the downside, the weather wasn't great. Seven of us set off on the ride and seven made it back, but with a change of people along the way (you know who you are!) Given the wettest December on record, doing a bit of unsurfaced bridleway off the Alban Way was a bit risky, but we got through and those on mountain bikes had mud on their wheels, which looks good. 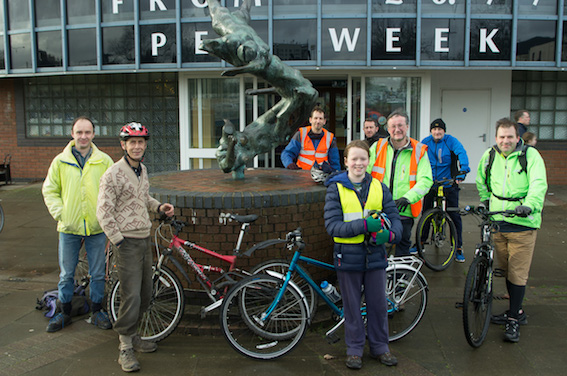 Most of the ride was on local cycle paths and this included our first official rides along the new Great North Road cycle path to Hatfield station and then the not finished but usable shared use path between French Horn Lane and Queensway. Work was very much in progress and is due to finish next month. Our finally loop round the south of town took in Streamwoods, Oxlease Wood and the annoying gates on the Great North Way, National Route 12. (How is any long distance cyclist with panniers is supposed to manage this bit?) Then up to the "Col de Hill Top" and back to town via the University for coffee and cakes. 10 miles without leaving Hatfield and without getting too wet. Not bad for January.

Click here to see previous rides and events for 2015

Click here to see previous rides and events for 2014

Click here to see previous rides and events for 2013

Click here to see previous rides and events for 2012

Click here to see previous rides and events for 2010

Click here to see previous rides and events for 2009